Last December I had the great fortune of finding myself in a run with multiple prime trout holding locations, and incredible amounts of large adult fish going absolutely berserk in a feeding frenzy. The biggest challenge was not in spending hours hunting and presenting, but in deciding which 18-26 inch trophy I was aiming for. Additionally, the river was only 15 feet wide, with spring-fed water that was crystal clear, un-pressured, and relatively untouched by people. While pinching myself, I wondered if this is what fishing Colorado was like 50 years ago. The following information will hopefully tempt you to take a trip abroad to embark on an epic adventure like mine with Andes Drifters in Argentina—home of Yerba Matte and great mountain people.
One of the most effective ways to become the best angler possible is by becoming a well-seasoned traveler. That could mean covering the whole stretch of your home water in different seasons, traveling to new areas within the country you live, or the ultimate bucket list prize of an exotic new country, with all adventures undertaken in hopes of trout hunting success. This is exactly what I accomplished with Gonzalo Flego and Gustavo Hiebaum of Andes Drifters. Thanks to their expertise and customized experience, my good friend Jay Nichols and I found ourselves in the remote narrow waters of Northern Patagonia, Argentina, casting to large hungry trout that would rather suck in a dry than chase a nymph.
Trout and salmon were introduced to Argentina in the early 20th century for recreational fishing in lakes and rivers in the southern provinces of Río Negro, Neuquén, Chubut, Santa Cruz, and Tierra del Fuego. The species, which readily adapted to local conditions, continued breeding without human intervention, and all trout since the 1940s are wild reproducing populations. It is estimated that 70 percent are rainbow trout, although brooks, browns, and Atlantic salmon were also introduced. 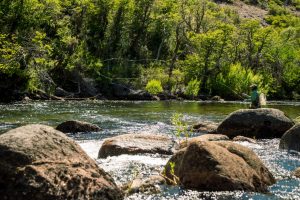 I must admit, the best gift I received last holiday season was the chance to travel south to Patagonia, leaving the powder days of Colorado with sunscreen in hand for the start of summer in Argentina. The journey began after touching down at the small airport in San Martin. From there we navigated by dirt and gravel road to a wonderful small bed and breakfast that became our base camp for the first leg of the trip. Malbec and good conversation would flow during the gourmet dinners, and the first two days were filled with some of the most amazing scenery I have ever seen as a trout hunter. Perched high upon the trail twenty feet above the river, I watched giant rainbows search for every easy meal on the water’s surface. They did not just rise for a few hours… these fish ate all morning!
On day three we decided to switch things up and travel to fish below the mighty presence of the Lanin Volcano, surrounded by Monkey Puzzle trees, and wading swift boulder water in search of mainly rainbow trout using streamers and nymphs. The upper Malleo River is famous not only for the fish, but for the breathtaking views, as well.
Mid week it was time to slow things down, not in terms of less fishing, but in the pursuit of fish in the slow open meadow settings of rivers and spring creeks. This was the highlight of the trip for me, spotting large browns (20-28 inches) in waters that are only 15 feet wide, waiting and watching for them to give the signal that they were willing to rise to a fly. All I could do was tell myself to not set too fast and pull the treat away from the bruiser brown that—no joke—would move the length of the river to suck in a fly. The challenge was making sure every cast was on point. The fly line a majority of the time would land on the gravel bar or grassy bank, while the 20-foot leader line would land up above the fish and drift down.
You could not mend or recast….you were all in or nothing. This heart racing action continued during the remaining days with a switch in accommodation from tent camps on the edge of Lake Filo Hua-Hun, to the stunning views from a gorgeous lodge perched high above San Martin.

The buddy system is the approach of using 4-8 sets of eyes over two to sight fish, and, most importantly, analyze the situation at hand. We were trying to determine the best way to approach the fish, and not just in terms of spooking it; what I learned from this trip more than ever was the need for a perfect position to get that one perfect cast….
and I mean one! Some of the positions only allowed one cast for one fish. By the last few days of our 6- day adventure, it was like golfing on the green, going over the best angle for the putt.
I immediately took a mental trip back to my third year of guiding, when a wise angler asked me if I knew my ABC’s. My response was, haha, of course I do. However this kind angler was not being sarcastic; instead, he taught me that you should always have three locations from which to approach each trout: point A, point B, or point C. Not only does this give you options up and down stream, or on either side of the trout, it forces you to learn to be patient and watch both the fish and the water to find that perfect location.
Since learning that tip, I can honestly say that at least 60 percent of the time I prefer an upstream position from the trout, to allow my fly to drift into the viewing lane first. That held true in the remote waters of Argentina with most of the large trout remaining eager to feed on the surface; the water was amazingly clear because it is spring-fed, along with runoff from the Andes. This also prevents sediment that can stain water.

Now, I always thought I used long leaders on my home waters of the South Platte. Some days I would end that day building up to 15 feet. Well, that was only the starting point for the Argentine adventure. The trout were not leader-shy; instead, they were extremely line and movement shy….to the point where some presentations required the fly line to only fall on land, while the 20-foot leader drifted in the current to the fish. Mending in many situations was not an option; this is why we covered approach and delivery to start—because it was all about first impressions to these trout.
With the use of monofilament, the rigs floated well. The formula in which to build these long systems was fairly simple, but effective for turning over dries up to size #8 attractors like a Royal PMX, or #14-18 Black Foam Beetles. Sixty percent butt section, twenty percent mid section, and twenty percent tippet section. On paper it would look like this: 60% 0-1X, 20% 3X, and 20% 4x. Matched with the Scientific Anglers Ultimate Trout Textured line, we were ready to battle wild trout in any conditions.
Lastly, once we were rigged, the final challenge was to make like rock and hold still until the fish took the dry and dropped its head below the water’s surface. This was hard enough when we couldn’t see the fish below the rise form; try waiting without movement as a 26- inch brown confidently swims over 10 feet to eat the large dry. It was awesome!

I am a big fan of fighting trout on the move by keeping leverage above the trout’s head to wear down the target by forcing it to head shake. But in these small fishing zones, it was either impossible to follow the fish from landscape, fast water, or structure half the time. After Gustavo shared this bit of information I thought to myself “How will this tank wear itself out?” It did not take long for the answer: these wild fish acted like they were trained in the trout NBA; simply put, they had hops. Eye-level jumps—back, to back, to back. Matched with the rod positioned upstream of the trout water level, the fish were eager to swim upstream towards the rod tip to relieve pressure.
The biggest question I have received over the year is, “Do you bow to the trout after it jumps, or do you follow the jumping motion up and down with the rod still in a convex path?” I am a fan of following the jump. Unlike Tarpon that jump on the move, trout tend to leap up, not forward, with numerous head and body shakes along the way. If you bow to the trout, you can run the risk of letting slack line fall below the leaping target that can land on your rig and break off.
Matched with rod tip pointing at the fish, you then have a fighting chance to land a quality fish on any waterway.
As I sat back in my seat on the plane for the long journey home, I realized that not only was this a successful trip with great fish landed, it was a true learning/catching experience.
We brought back more knowledge than when we arrived, and quickly took advantage of the techniques in Colorado. Try some of these tips on your next flyfishing adventure, whether that be on your home waters or a destination like this one with Andes Drifters to Argentina. 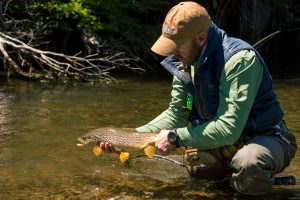 Landon Mayer is a veteran Colorado guide and author of several books, including 101 Trout Tips: A Guide’s Secrets, Tactics, and Techniques-Stackpole/ Headwaters Books. He has co-produced 2 fly fishing DVDs with John Barr, both available from Mad Trout Media. Visit Landon’s website at www.landonmayer.com